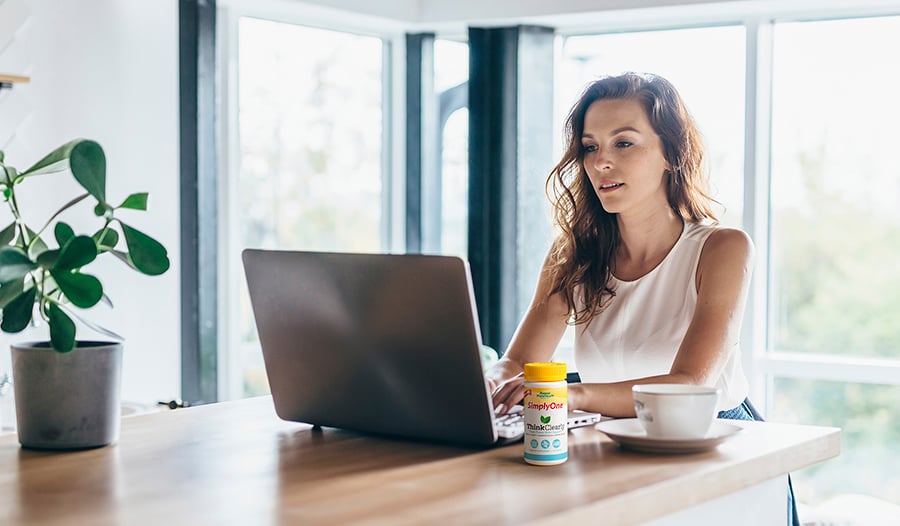 Your ability to focus is affected by many factors that can decrease your attention span and ability to concentrate. Stress, disease, diet, medications, nutrient deficiencies, and age can all have a significant impact on your focus and cognitive ability.

Caring for multiple children or an aging parent, working a stressful job or being unemployed, as well as worrying about world affairs, and dealing with the consequences of a pandemic are all real examples of stressors that could harm your ability to focus.

A diagnosis of any disease that directly affects focus due to treatment and worry represents how many illnesses can affect your concentration and thinking ability. Many medications or treatments can cause side effects of brain fog. Lack of certain vitamins, minerals, and other nutrients can also harm focus and attention. As we age, we tend to see a decline in some cognitive abilities, including focus.

Don’t worry, there is hope. Nature has provided an abundance of resources to help you with focus, attention, and cognitive functions.

Taking a proactive approach will help you optimize your brainpower. These are the best supplements for improved focus, attention, and concentration.

Resveratrol belongs to a group of compounds called polyphenols. They act as antioxidants, protecting the body from damaging free radicals. Resveratrol is found in the skin of red grapes, red wine, peanuts, pistachios, blueberries, and cranberries.

For added cognitive support, a resveratrol supplement should be considered. A study found that resveratrol helps prevent age-related cognitive decline by supporting the hippocampus, a portion of the brain associated with memory.

Studies have shown that those taking up to 400 mg of phosphatidylserine daily had improved memory and thinking ability. Other studies show improvement in memory function for those who are cognitively impaired after phosphatidylserine supplementation.

Phosphatidylserine is an important component of our cell membranes. In response to stress, the body releases epinephrine and norepinephrine. Phosphatidylserine helps regulate these neurotransmitters in the brain, which helps stabilize mood and reduce symptoms of stress, depression, and anxiety.

With improved thinking ability and decreased stress and anxiety, your ability to focus can improve substantially with phosphatidylserine supplements.

Native to China, ginkgo has been used for millennia to support brain function. Also called the maidenhair tree, ginkgo biloba has been found to increase blood flow to the brain. This, in turn, improves cognitive abilities such as focus and memory.

Rhodiola is a perennial flowering herb that grows wild in the arctic regions of Europe, Asia, and North America.

As an adaptogen, rhodiola is an herb that helps the body resist and adapt to physical and mental stress. In conjunction with its mild stimulating effects, rhodiola can help improve focus with increased energy while improving your ability to respond and adapt to stress.

One study found that participants with chronic fatigue symptoms showed significant improvement in concentration, quality of life, mood, fatigue, and stress symptoms after only one week of taking 400 mg of rhodiola daily. Improvements continued to increase throughout the 8-week study period.

A creeping herb native to the wetlands of eastern and southern India, bacopa monnieri is a perennial plant that is also commonly called water hyssop. Traditionally used in Ayurvedic medicine, bacopa may increase memory, learning, and thinking ability.

Other studies have found bacopa could help reduce symptoms of ADHD, or attention deficit hyperactivity disorder. The study discovered children with ADHD who took bacopa had improved attention, restlessness, and cognition compared to placebo.

Maca root may help improve focus by supporting two parts of the brain, the pituitary gland, and the hypothalamus. Maca has also been shown to stimulate brain activity and boost mental energy.

Indigenous to Peru, maca has traditionally been used to boost sex drive, fertility, and energy. Also known as Peruvian ginseng, maca grows in the Andes mountains above 13,000 feet. A cruciferous vegetable, maca has a significant history of medicinal use in Peru. The root is most often used and is full of vital nutrients essential to proper brain function and focus.

Rich in polyphenols and vitamin B6, maca has neuroprotective benefits that protect the brain from an injury from exposure to neurotoxins and neuroinflammation. The polyphenols in maca help to promote improved memory, cognitive function, and learning. Vitamin B6 is needed to make certain neurotransmitters or chemical messengers in the brain. Vitamin B6 deficiency may be associated with dementia and cognitive decline.

Primarily found in green, black, and white teas, L-theanine has been shown to improve attention and working memory in middle-aged and older individuals. Classified as an amino acid, L-theanine is also found in mushrooms.

Said to help foster attentive wakefulness and a state of calm, L-theanine has positive benefits on both mental and physical health. It may lower heart rate and blood pressure associated with stress, as well as symptoms of anxiety.

MCT, or medium-chain triglycerides, have been widely studied for their brain-boosting benefits. MCTs are fatty acids that have a chain length of 6-12 carbon atoms. MCTs are broken down quickly and sent to the liver, where they may be converted to ketones. Ketones can cross the blood-brain barrier and provide another source of energy for the brain if carbohydrates, the brain's preferred fuel source, are not readily available.

One such study showed that MCT supplements could provide energy to dying neurons, helping to keep brain cells alive. This is especially important for Alzheimer's patients.

Another study demonstrated a 9 percent energy increase in the brain with MCT supplementation. Antioxidant and anti-stress are additional labels said to apply to MCTs.

Taking two tablespoons or 30 ml of coconut oil can provide a sufficient dose of MCTs along with simply taking an MCT supplement.

With the numerous distractions that are a part of your everyday life, it can be difficult to focus and pay attention to the task at hand. It can be especially challenging if an illness or nutrient deficiency is added to the equation.

Luckily you can choose from several options to help boost brain power and focus ability. With each supplement having its mechanism of action, it's important to select the one you feel will help your lifestyle and mental support needs.

Always talk to your doctor before beginning a new supplement, especially if you are pregnant or nursing, taking other medications, or undergoing any type of medical treatment.

Dr. Carlie Biggins, ND, is a licensed Naturopathic physician specializing in all things holistic, including education, products, and services. Dr. Biggins has a thriving holistic health practice in Pearland, TX, and travels nationwide to speak on various natural healthcare topics. She is also CEO of Monaco Natural Health Solutions and gifts readers a free Natural Health Solutions Guide to discover Natural Ways to care for themselves from head to toe at drcarlie.com.

Previous Article
L-Theanine: The Nutrient in Green Tea That Has Powerful Health Benefits
Next Article
10 Dietician-Approved Items To Put in a Healthy Holiday Gift Basket

Feeling Fatigued? 5 Supplements For a Natural Boost of Energy

What Is Bladderwrack? 3 Healthful Benefits According to a Naturopathic Doctor

21,304 Views
Bladderwrack is an incredible plant with a variety of uses. A naturopathic doctor explains the benefits of this seaweed for your thyroid, skin, and digestion.