The Thymus Gland – The Master Control of the Immune System 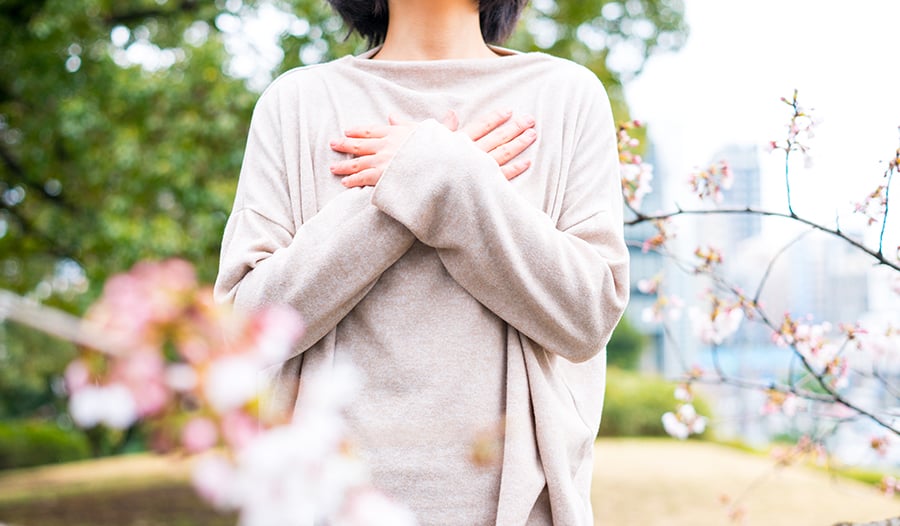 The importance of the health of our immune system has become painfully obvious. If the immune system is suppressed or not functioning at optimal capacity it leaves us more susceptible to infections and sometimes that can have severe consequences. There is no guarantee that a strong immune system will offer complete protection, but when working properly, the immune system has a remarkable arsenal of weapons to protect us and it is important for us to do everything we can to ensure it is functioning optimally.

The Thymus Gland and Cell-Mediated Immunity

The thymus is composed of two soft pinkish-gray lobes located just below the thyroid gland and above the heart. To a very large extent, the health of the thymus determines the functioning of an arm of our immune system known as “cell-mediated immunity.”

One of the keys to establishing a healthy immune system is employing measures to ensure proper thymus function. This involves the following:

The thymus gland shows maximum development immediately after birth. During the aging process, the thymus gland undergoes a process of shrinkage or involution. The reason for this involution is that the thymus gland is extremely susceptible to free radical and oxidative damage caused by stress, radiation, infection, and chronic illness.

Many people with impaired immune function as well as conditions associated with impaired immunity (e.g., cardiovascular diseases, diabetes, chronic obstructive pulmonary disease, chronic kidney disease, cancer, etc.) suffer from a state of oxidative stress.1 This means there is a greater number of prooxidants than antioxidants in their body. Increased oxidative stress is quite detrimental to thymus function as well as accelerates aging, especially of the immune system.2 One of the primary ways in which antioxidants support proper immune function, particularly cell-mediated immunity, is by protecting the thymus gland from damage. The antioxidant nutrients most important for protecting the thymus include vitamin A (as beta-carotene), vitamin C, vitamin E, zinc, and selenium. Not surprisingly these same nutrients along with the B vitamins are also essential in supporting the manufacture of thymus hormones as well as all of the other components of the immune system.

A multiple vitamin and mineral formula that provides at least the recommended dietary intake (RDI) is a very good nutritional insurance policy in supporting the thymus gland, especially against age-related decreases in immune system function. The elderly are at the highest risk of nutritional deficiency. The effect of a multiple vitamin and mineral supplement on immune function in the elderly has been examined in several double-blind studies.3 The results from these studies showed that elderly subjects receiving the nutritional supplement demonstrated improvements in many immune system functions and had significantly fewer infections compared to the placebo groups.

Spirulina is a Superfood for the Thymus

Spirulina is another good recommendation to provide improved nutrition to the thymus gland. Spirulina is a blue-green algae that is particularly rich in protein, carotenoids, vitamins, minerals, and essential fatty acids. It is a longtime favorite superfood for many health-minded individuals for good reason. It has an excellent nutritional profile and is rich in valuable phytochemicals. During this time of increased focus on foods and nutrients to support immune system health, spirulina is a smart choice.

Spirulina has shown impressive antioxidant and immune-enhancing effects. In addition to its exceptional nutritional profile, spirulina contains various phytochemicals with antioxidants and supporting effects on immune system function. In particular, spirulina seems to be especially helpful to our innate immunity in a way that suggests a mechanism of action that involves the thymus. For example, it supports the normal activity and function of natural killer cells and exerts supportive effects on T cells and thymus-supported chemical factors. Some of these benefits may be related to its antioxidant components, especially phycocyanin – spirulina’s blue pigment that is a useful cell protector. Spirulina has been shown to improve both blood markers of oxidative stress as well as markers of immune function. Improvement of at least one marker of either a decrease in markers of oxidation or an increase in antioxidant enzymes was reported in healthy subjects with chronic lung challenges (1 g and 2 g/day at 60 days); healthy subjects (7.5 g/day at 3 weeks); elderly subjects (8 g/day at 12 and 16 weeks); runners (4 g/day at 2 weeks); and those with type 2 diabetes (8 g/day at 12 weeks).4

Spirulina is available as a dietary supplement in capsules and powder form. The typical dosage recommendation is 1 to 8 grams per day, but even higher dosages have been used (e.g., 20 g per day) and are regarded as safe. Higher dosages are generally used when spirulina is being ingested for its protein content or when optimal antioxidant and immune system support is desired; lower dosages are used for general antioxidant support and immune system support.

Spirulina is one of the richest sources of beta-carotene with a concentration that is ten times higher than carrots. And beta-carotene is just one of the ten carotenoids found in spirulina. Carotenoids represent the most widespread group of naturally occurring pigments in nature. They are a highly colored (red and yellow) group of fat-soluble compounds. The best known is beta-carotene, which the body can convert to vitamin A. Biological activity of a carotenoid has historically been considered synonymous with its corresponding vitamin A activity. Beta-carotene has been termed the most active of the carotenoids due to its higher provitamin A activity. However, recent research suggests that this function of carotenoids has been overemphasized since they have been found to exhibit many other important physiologic activities. More than 600 carotenoids have now been characterized, but only about 30 to 50 are believed to have vitamin A activity. Examples of non-provitamin A carotenes with important health benefits include lutein, lycopene, and astaxanthin.

As it relates to immune function, many of these non-provitamin A carotenes positively influence the immune system and may also offer even greater protection to prevent the shrinking of the thymus. Carotenoids are important in supporting white blood cell function as well as being especially important to cell-mediated immunity through increasing the effect of immune cell signaling compounds like interferon.5 Interferon is a powerful immune-enhancing compound that plays a central role in protection against viral infections.

While carotenoids have been shown to exert a number of immune-enhancing effects in recent studies, the overall effects of carotenoids were known as far back as 1931 when it was found that a diet rich in carotenes, as determined by blood carotene levels, was inversely related to the number of school days missed by children.6 In other words, the children with higher levels of carotenes in their blood missed the fewest number of days of school. Originally, it was thought that the immune-enhancing properties of carotenes were due to their conversion to vitamin A. Now it is known that carotenes exert many immune system–enhancing effects independent of any vitamin A activity through their effects primarily in protecting the thymus gland and cell-mediated immunity.

Spirulina’s impressive antioxidant effects are largely due to its high carotene content along with its phycocyanin pigment.7 The beta-carotene in spirulina also appears to be very well utilized based upon human clinical studies. In one of these studies, in 5,000 pre-school children in India a dosage of 1 gram of spirulina was shown to be helpful in reversing severe vitamin A deficiency. After five months, the proportion of children with serious vitamin A deficiency fell from 80% to 10%. Preformed vitamin A (retinol) is better served for this purpose as in malnutrition the conversion of beta-carotene to vitamin A is impaired. Nonetheless, this study demonstrated that even very low doses of spirulina are sufficient to achieve a considerable reduction in the risks of blindness, immune suppression, and neurological damage caused by vitamin A deficiency in children.8

In addition to spirulina, among the richest sources of carotenes are green leafy vegetables. The carotenoids in green plants are found in the chloroplasts with chlorophyll, usually in complexes with a protein or lipid. Beta-carotene is the predominant form in most green leaves. In general, the greater the intensity of the green color, the greater the concentration of beta-carotene. Orange-colored fruits and vegetables - e.g., carrots, apricots, mangoes, yams, squash, etc. – are also good food sources of carotenoids. The red and purple vegetables and fruits - such as tomatoes, red cabbage, berries, and plums - contain a large portion of other types of non-provitamin A carotenes (e.g., lycopene) as well as another group of pigments known as flavonoids.

Spirulina is an excellent choice for a beta-carotene source and remember it contains a full carotenoid complex – that is important. There are also other natural sources of beta-carotene products on the market including those derived from carrot oil, the algae Dunaliella salina, and palm oil. The natural forms appear to offer advantages over the synthetic form in that they contain a broader range of carotenes, exert more antioxidant protection, and are better absorbed. In addition, natural sources are definitely better for supporting immune function. For example, in a study in healthy college students, better results in improving immune function were shown in the group that consumed approximately 15 mg beta-carotene per day from carrots compared to those who took 15 mg of synthetic beta-carotene.9

A daily dosage of 15 mg of mixed carotenes or natural beta-carotene (25,000 IU or 7,500 RAE) is generally regarded as a safe and effective dosage for supporting immune health. The level of beta-carotene and total carotenoids is stated on the Supplement Facts or Nutritional Facts panel of these products.

Previous Article
A Doctor’s Healthy AM to PM Routine While Working from Home
Next Article
Keto Essentials: The Best 3 Superfoods to Boost Flavor and Nutrition

Zinc: The Gatekeeper of Immune Function

Zinc serves a vital role in many immune system reactions. In particular, zinc is critical in the function of the thymus gland, white blood cells, and our innate immunity.

3 Tips to Help Strengthen The Immune System in 24 hours

During flu season and a pandemic, it's important to keep your immune system strong. Get tips and learn the best supplements for improving immunity.

6 Signs Your Immune System Could Use a Boost

A doctor explains six things to look out for that could indicate a weak immune system. And how to improve immunity naturally.