Your preference has been updated for this session. To permanently change your account setting, go to My Account
As a reminder, you can update you preferred country or language anytime in My Account
Email a Friend!

Your email is being processed. 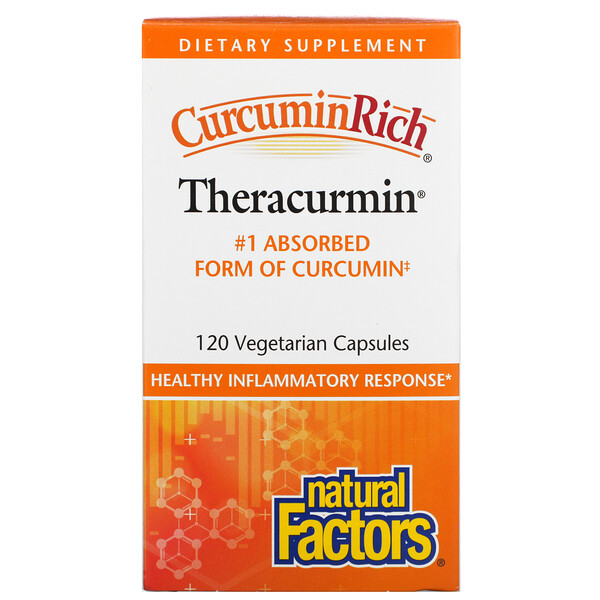 When consumed orally, the absorption (bioavailability) of regular curcumin is quite poor. The reason is that curcumin is relatively insoluble in water and is rapidly transformed and excreted from the body. Poor absorption has been a reason that not all clinical studies have shown regular curcumin to be effective even when extremely large doses were given.

But CurcuminRich contains Theracurmin - a natural preparation that utilizes advanced techniques to reduce the particle size of curcumin within a vegetable gum (gum ghatti) to dramatically increase its solubility and bioavailability. Detailed absorption studies have proven that Theracurmin is the best-absorbed form of curcumin on the market. ‡ This improved absorption with Theracurmin is extremely important in getting the health benefits curcumin provides.

A major breakthrough in curcumin absorption!

Theracurmin represents a major scientific breakthrough and is the #1 absorbed form of curcumin. ‡ Finally the powerful health benefits of curcumin can be fully realized!

Curcumin is the yellow pigment in turmeric with many valued health benefits, but it is difficult for the body to absorb. Theracurmin is a natural curcumin preparation that utilizes advanced techniques to reduce curcumin's particle size, dramatically increasing its solubility and bioavailability. Detailed absorption studies have proven that Theracurmin is the best-absorbed form of curcumin on the market. ‡

‡ Scientific scrutiny revealed that Theracurmin was more bioavailable in a milligram-to-milligram basis than other leading^ enhanced and regular forms of curcumin.

1 capsule up to 2 times per day or as directed by a health professional.

Manufactured by Natural Factors to ensure safety and potency in accordance with Good Manufacturing Practices (GMP) of the FDA and Health Canada.

As with any supplement, consult your health professional before use if you are pregnant, breastfeeding, or trying to conceive, or if you are taking medication, have a medical condition, or anticipate a surgery. Keep out of the reach of children.

Sealed for your protection. Do not use if seal is broken. For freshness, store in a cool, dry place.

While iHerb strives to ensure the accuracy of its product images and information, some manufacturing changes to packaging and/or ingredients may be pending update on our site. Although items may occasionally ship with alternate packaging, freshness is always guaranteed. We recommend that you read labels, warnings and directions of all products before use and not rely solely on the information provided by iHerb.